A frenum is a naturally occurring muscle attachment, normally seen between the front teeth (either upper or lower). It connects the inner aspect of the lip with the gum, close to the teeth. A lack of tough gum in conjunction with a high (closer to the biting surface) frenum muscle will pull away the gum that is supposed to be attached to the teeth. Additionally, an excessively large frenum can prevent the teeth from coming together resulting in a gap between the front teeth. If pulling is seen or the frenum is too large to allow the teeth to come together, the frenum is surgically released with a Frenectomy. Sometimes a soft tissue is added to re-establish an adequate amount of tough gum.
When Orthodontic treatment is planned or initiated, the removal of an abnormal frenum, can increase stability and improve success of the final orthodontic result. 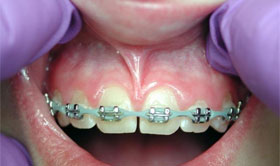 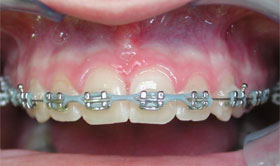 A Frenectomy is the removal of a frenum-a muscle that
projects between the two front teeth causing a space. Photos courtesy of Dr. Veasey Cullen